HIGH ON THE QUALITY – LOW ON THE BUDGET

HTR is UL listed self-regulating parallel heating cable (heating tape) is designed for a variety of industrial applications and environments, including hazardous and non-hazardous. It can be used for plastic or metal pipe freeze protection and flow maintenance of pipes, tanks, valves.

Heavenly Heat has quality, effective and affordable pipe freeze prevention for Toronto homes that will ensure the pipes in your home are never out of order due to freezing issues. Pipe freezing is a common, yet completely preventable problem that routinely plagues the households of many Canadians during the winter months. Here at Heavenly Heat, we’re pleased to be offering a solution that is easy to install, cost efficient, and very effective in eliminating the problem of pipe freezing altogether.

In addition to the usual effects of winter like snowy roads, traffic congestion and the bitter cold, the long Canadian winter can also wreck havoc on the internal systems of our homes. One of the more common and potential places for the cold to do its damage is on the arteries of a household — the pipes. Pipes are responsible for transporting water and other elements from one section of the home to another — pipe freezing occurs when the contents are frozen, thereby halting movement and creating blockages.

HIGH ON THE QUALITY – LOW ON THE BUDGET 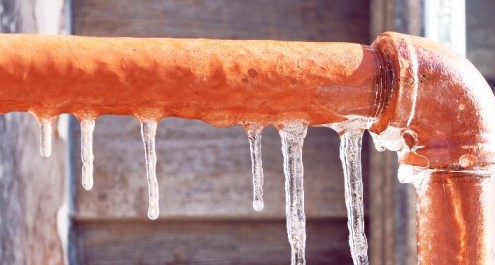 Pipe freezing in homes is not only an inconvenience, but also a potential hazard that can cost thousands of dollars of damage to your property. The obvious result of having frozen pipes is that the pipes no longer function as intended, as the blockages created by the freezing has restricted any movement within the pipes. However, the temporary loss of function is just one small inconvenience compared to what could potentially happen if the problem isn’t treated. Given time, the frozen water in the pipes will expand, creating leaks and cracks that can eventually lead to pipe bursting. This rupture can mean anything from the replacement for that particular section of pipe, to an entire flooded basement if the pipe burst is serious.

Pipe freezing can be resolved in several ways, all of which consist of adding heat to the pipes; however, none of these solutions prevent the freezing from occurring — they can only fix the problem once it has occurred. Heavenly Heat’s pipe freeze prevention system is better because it doesn’t let the freezing to occur in the first place.

Our pipe freeze prevention system consists of self–regulating cables wrapped around the water pipes in your property at regular intervals. With the consistent and effective application of heat on the pipes in your household, the system can prevent freezing from ever occurring in the first place. This energy efficient system monitors the external environment and only activates when necessary, meaning that there will be no needless heating of pipes when there is no threat of freezing occurring. Rest assured that the water pipes in your home are always sufficiently heated and secured against pipe freezing with the best pipe freeze prevention in Toronto, courtesy of Heavenly Heat.

Our PRO-Tect Pipe Freeze Protection system is engineered to efficiently prevent ice buildup in the pipes. To guarantee the best installation, we offer free design services that ensure you purchase the heating system that meets your project requirements best.

Can you cut the freeze protection cable to the desired length?

Yes, you can. The cable is a parallel electrical device which means you can cut it without affecting the power output per foot. We sell this product by foot which means you get to avoid wastage on the job site.

Must insulation be used?

Yes. The use of insulation with the pipe freeze protection system is recommended because of these reasons:

How does the cable work?

Fiberglass-based tapes are recommended for attaching the cable to the pipe. We offer them at Heavenly Heat.

How much cable will be needed for the project?

The amount of cable needed depends on the size and type of the pipe. The lowest expected temperatures also matter. With information on the type of pipe, pipe diameter, length of pipe and the minimum expected temperature you can contact us for a quote.

Will the system be on always or will there be a built-in thermostat?

There is no built-in thermostat. However, we recommend using our controls which activate the system for continuous operation at 40 degrees F or below.

Is there are maximum length limit?

What is the power output of the cable?

At a minimum, the system is made up of a PRO-Tect Pipe Freeze Protection Self-Regulating Cable, Power Connection Kit, and End Seal Kit. Installing a control is highly recommended. We offer all these components together with other accessories. The use of another manufacturer’s components will void the warranty.

Where can you use the pipe freeze protection cable?

The cable can be used on aboveground water pipes that are insulated and weatherproofed.

No. They must be used with AC voltage.
Scroll to top